Language:English and Japanese (with simultaneous interpretation)

Norway is a generally admitted egalitarian country. Japan and other countries hovering near the bottom of international gender equality rankings are willing to learn from Norwegian success and studying their policies and systems. On the other hand, gender researchers in Norway are critically examining their ‘success story’ and analysing overlooked cracks behind the national egalitarianism.

The Institute for Gender Studies (IGS) hosted an online symposium, entitled ‘The Egalitarian Norway: Scrutinizing the “Success Story”’, on 30 November 2020. This symposium was held as part of NJ_BREGED (INTPART), an international collaborative project between IGS and The Center for Gender Research at the Norwegian University of Science and Technology (NTNU). The opening remarks, which were made by the Ambassador of Norway to Japan, Inga M. W. Nyhamar, and Vice President of Ochanomizu University, Yasuko Sasaki, explained the significance of the project and stated their expectations for the project outcome.

The keynote speaker for the symposium was NTNU Professor Priscilla Ringrose, and the title of her keynote was ‘Gender Equality in Norway: Advances and Paradoxes’. Norway promoted state feminism and achieved an advanced level of gender equality that many other countries see as a landmark. However, Norwegian policymakers and gender researchers have yet to address unsolved issues, as well as those that have emerged in the process of this achievement. 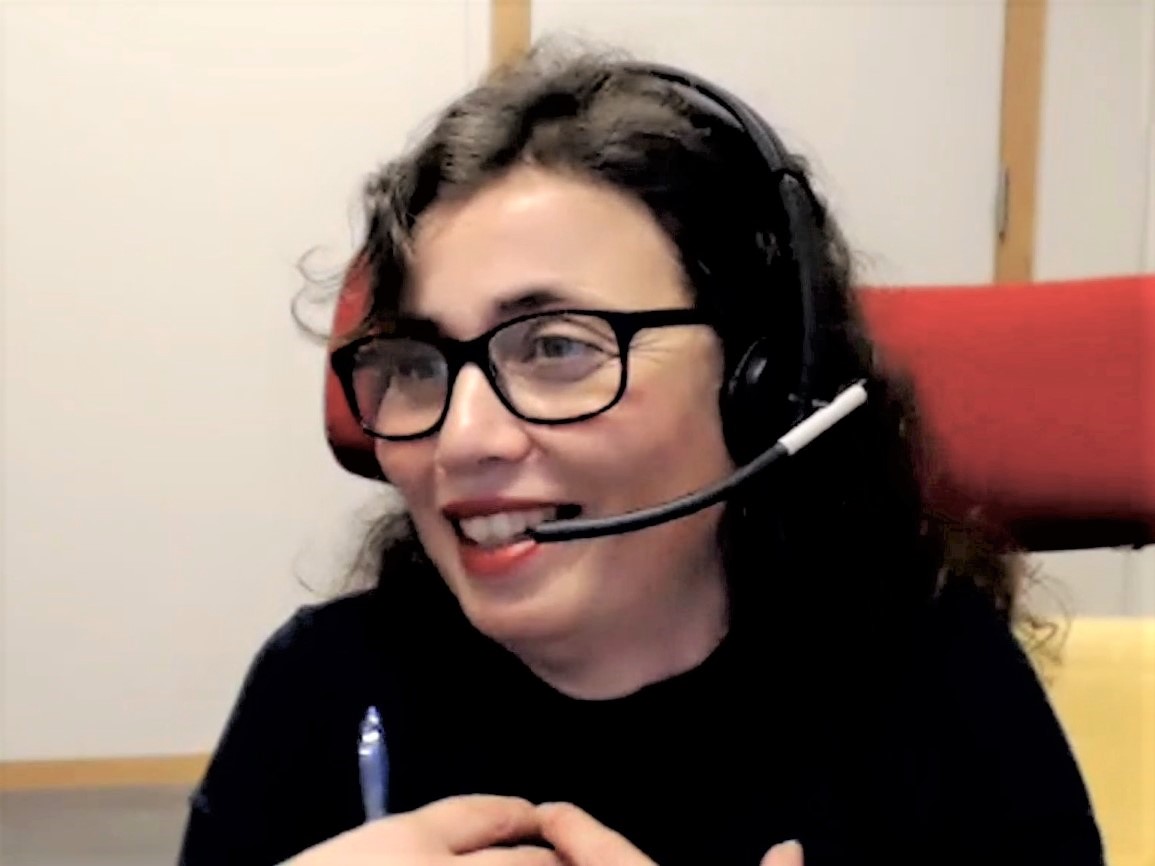 The ideal family model in Norway is a dual-career and dual-worker model, in which both the husband and wife have fulltime jobs and participate in childcare to an equal degree. In Norway, the rate of women’s labour force participation is 75% (in Japan 70.9%). The gender pay gap is relatively small, and on average, women earn 86% of men’s earnings (in Japan 74.3%). Paternal leave is taken by 70% of fathers (in Japan 7.43%). On average, Norwegian men spend 2 hours and 22 minutes on household work per day, while women spend 3 hours and 47 minutes (in Japan, 44 minutes for men, and 3 hours 28 minutes for women). These statistics indicate that regarding paid work and work-life balance, Norway’s achievement in gender equality is remarkable compared to that of Japan.

Nonetheless, Norway endeavours to develop a more equal society. An examination of equality in the workplace reveals a clear gender divide based on categories of occupation. Majority of the employees in the public sector are women; whereas, majority in the private sector are men. Female workers dominate education, health, and governmental administration, whereas male workers dominate manufacturing, construction, and transportation. This gendered difference in occupational choice is reflected in the subjects studied at university. Universities are making an effort to recruit female students in subjects that are traditionally considered suitable for men, such as engineering, and they have achieved some positive results. On the other hand, there is still little evidence of men stepping into subjects or jobs that are regarded as suitable for women.

One of the factors which make the Norwegian ideal family model possible is the existence of female migrant domestic workers, but this creates a paradoxical situation that reproduces a traditional and stratified division of labour. In recent years, the population of immigrants in Norway has consisted largely of domestic laborers who work as cleaners or au pairs for Norwegian families. These female workers undertake household work and childcare that is traditionally regarded as the work of women. This helps Norwegian families establish and sustain the dual-worker model. Such a new type of servant may bring about a new form of hierarchy based on gender and class in Norway.

From the 19th to the 20th century, the Norwegian government practiced forcible and discriminatory assimilation policies, i.e., Norwegianization, on ethnic minorities in Norway. Coming into the 21st century, the government established a commission that investigated the effect of Norwegianization measures on ethnic groups and individuals. This was done to review the government’s ill treatment of minority groups and to determine a means of reconciliation. On the other hand, the expectation for newly arrived immigrants to assimilate the values and social norms of the Norwegian majority has not changed. This is a new form of Norwegianization. Ringrose argues that there is a nasty paradox here. Facing Norwegian egalitarianism, immigrants from other cultures, particularly those from non-Western or Islamic countries, are regarded as inferior.

Responding to the keynote speech by Professor Ringrose, Yoko Totani, Professor at Ochanomizu University, commented as a discussant, focusing on the institutional and cultural changes that Norway has implemented. 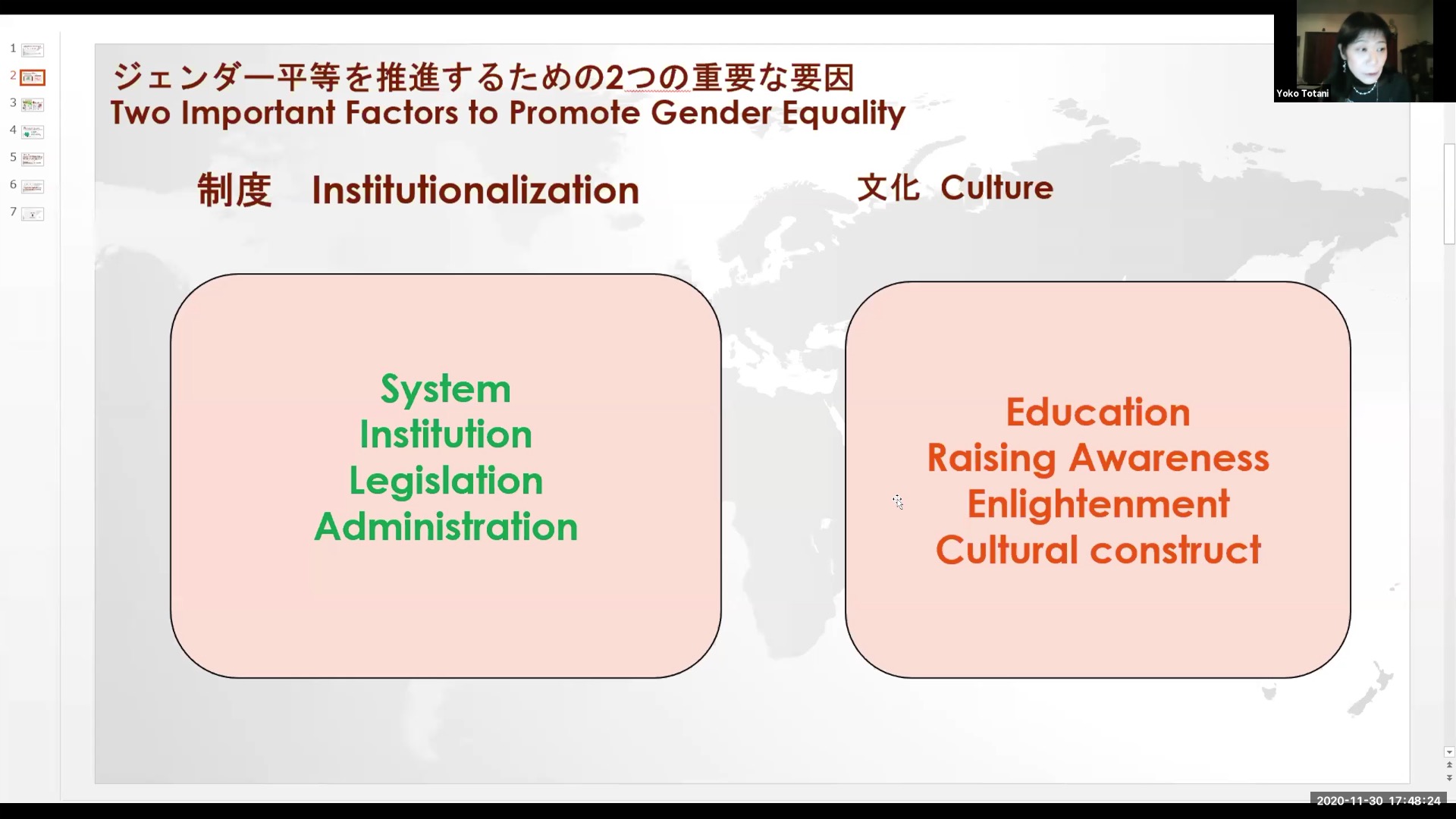 Norwegian state feminism stressed gender equality in access to the national decision-making body, and raised the proportion of female representatives in the national parliament to 40%. Japan has struggled to increase its number of female representatives, and the proportion remains at 9.9%, despite increased female representation in politics being a stated goal of the Japanese government. This degree of underrepresentation excludes women’s voices from policy development. As a result, social systems that disempower women do not change. For example, the proposal to allow married couples to have separate surnames has been continually rejected. Further complicating these issues, some female representatives support these cultural values of a male-dominated society. Moreover, legalization is not enough to bring about a change in society. For instance, Japan has instituted a very generous paternal leave system, but few fathers use it. Totani notes that the idea that household work and childcare are women’s work is still widely shared among Japanese citizens, and this cultural belief prevents fathers from taking advantage of the paternal leave system

As an expert of cultural representation studies, Totani referred to the renowned play, A Doll’s House, written by Norwegian playwright Henrik Ibsen in 1879, to explain the change in gender norms in Norway. A Doll’s House depicted the paternalistic gender norms common in 19th century Norway, which were very different from the gender equality standard in modern Norwegian society. This means Norway has achieved cultural transformation in this regard. Totani asked Professor Ringrose, 'How has Norway achieved such a cultural transformation?' 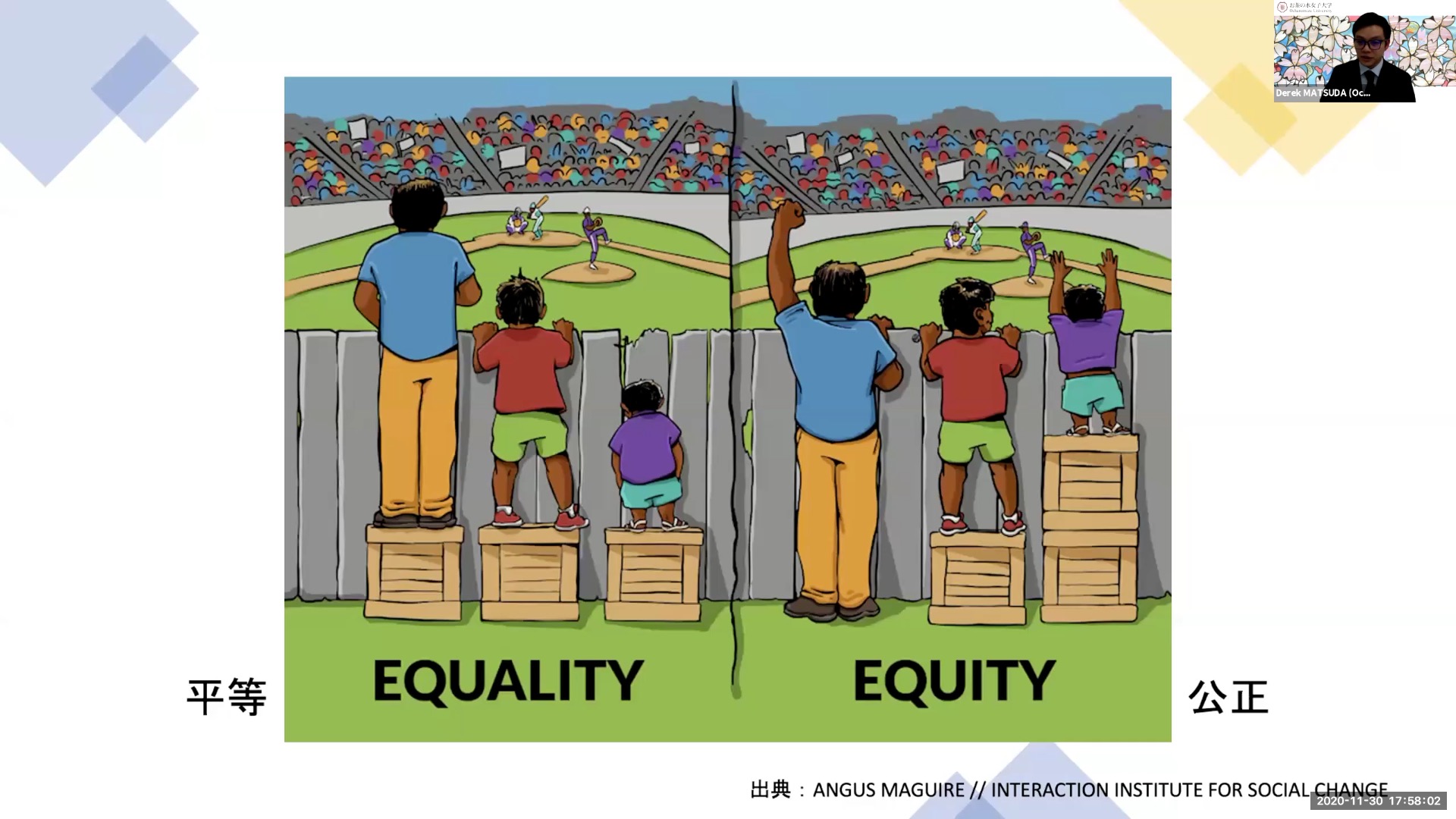 Further commentary by Derek Matsuda, Lecturer at Ochanomizu University, emphasized the difference between equality and equity. He suggested that when we talk about equality, what should be stressed is equity, which implies equality of result. As a scholar of international education and immigration studies, he presented the example of gender equality in immigrants’ families, and issues of education for their children.

In the discussion of equality in Japanese education, it is often said that all children must be treated equally, but this lacks the perspective of equity. Because of this, some schools are reluctant to provide special support for immigrant children, such as Japanese language support. Parents, especially mothers, who are more involved in children’s education, need this support as well.

Some immigrants come from countries where traditional gendered division of labour remains, which defines husbands as breadwinners and wives as caretakers of the house. Very often, such customs from their country of origin are maintained when they come to Japan. The wives, however, often get jobs to support household finances, and they have to carry the double burden of working at the workplace and at home. These mothers are also in charge of the educational matters of their children. They find that Japanese school culture is very different from what they are used to, and struggle to understand it. Printed material handed to pupils is a common method to inform parents about school events, but as it is written in Japanese, these parents do not comprehend what they are supposed to do. Thus, they fail to prepare school materials or attend events. As a result, teachers may regard parents as uncooperative, or uninterested in their children’s education. Parents do not know who to ask for support, so they rely on their children. The struggles of immigrant mothers and children are under-researched in Japan and not widely talked about.

Matsuda stressed that Japan could learn a lot from gender equality in Norway, but it is more important for Japan to develop policies that are suitable to Japanese reality. The proportion of immigrants in the total population of Japan is just 2.3%, while that of Norway is 18.5%. This number could be considered negligible, but addressing the problems immigrants face is necessary for Japan to become an egalitarian country in the truest sense. To conclude his commentary, Matsuda asked Professor Ringrose to explain how the concept of equality is discussed in Norway.

In the question and answer session, Guro Korsnes Kristensen and Siri Øyslebø Sørensen, Professors at NTNU, joined the panel. The NTNU professors thoroughly answered questions from Totani, Matsuda, and audience members. The closing remarks given by Professor Masako Ishii-Kuntz, the leader of the Ochanomizu team of the NJ_BREGED project, restated the aim and significance of the project, which is the basis of this symposium. The conditions of gender equality in Norway and Japan look very different, but careful comparison with fresh eyes leads to new discoveries, and these discoveries must contribute to the further advancement of gender equality in both countries. 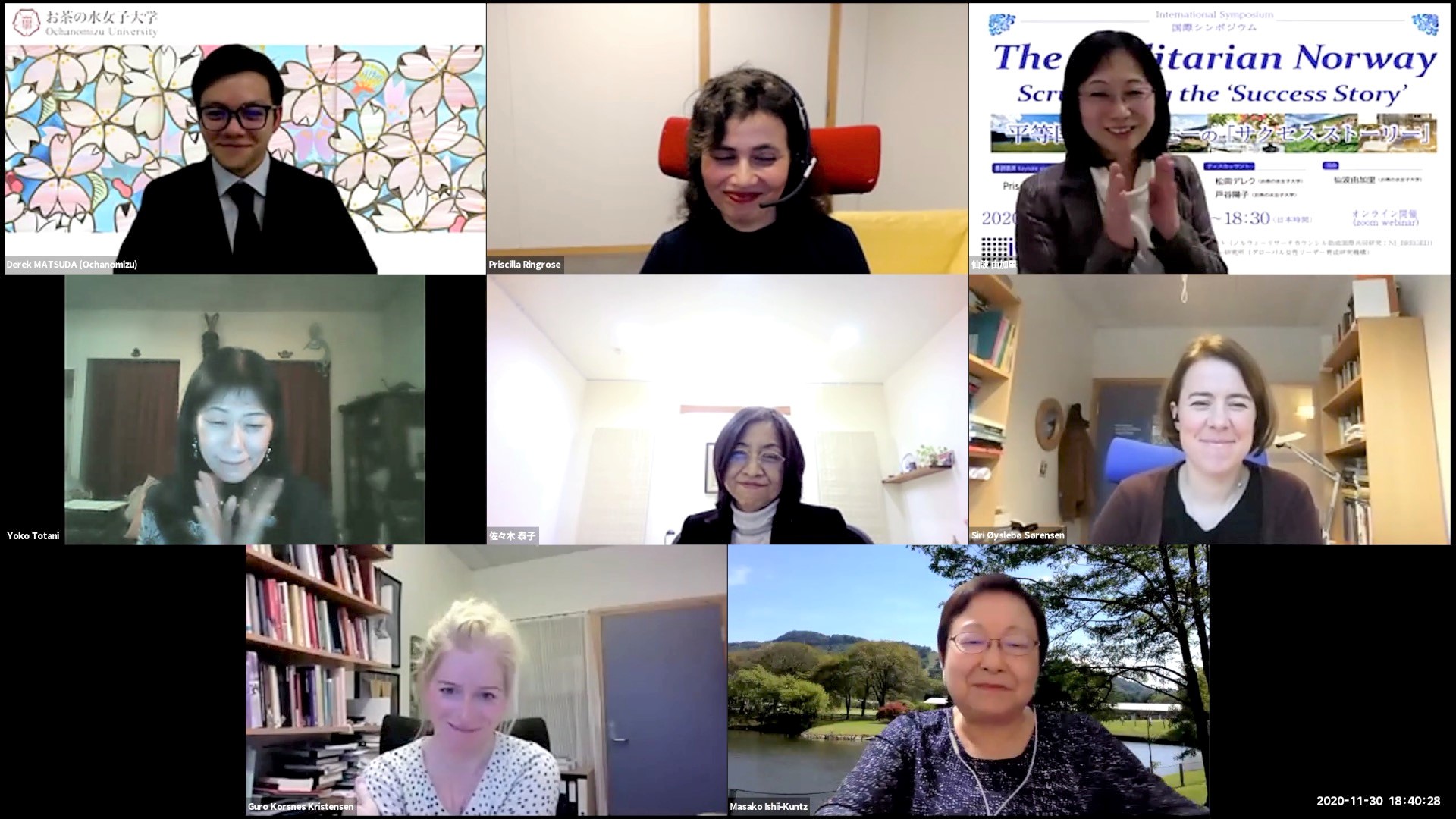