“Paradox” was a keyword of the lecture. Issues of gender equality are often found to be incompatible in scholarly discussions. The presentation cited one such example: the resolution of the problem of the burden of unpaid work such as household chores or childcare. Such solutions would require the contemplation of the asymmetric power relations and also consider problems pertaining to the international migration of labor in the present globalized world. This observation was immensely insightful.

In my opinion, the essential stipulations for the promotion of gender equality are two-dimensional: first, education that aims to enlighten or amend public awareness, and second, the normalization of the learned values through legislation and administration. I will examine these two aspects as they relate to Japan.

My comments will attend to two factors, system and culture. These features can also be termed regulation and education. I would also like to ask a few questions.

In the presentation, Professor Ringrose talked about the state feminism in Norway in the second half of the 20th century. Helga Hernes defined state feminism as “women and men having equal access to the state’s decision-making bodies and their services.” This description suggests the importance of the representation of women in national policymaking agencies. That Norway has achieved this idea is clearly demonstrated by the proportion of women representatives elected to the country’s parliament.

The latest statistics relating to the Inter-Parliamentary Union (as of Oct. 2020) evince that the proportion of women representatives in Japan’s House of Representatives is a scant 9.9%. The current world average representation of women in national legislatures is 25.2%, and Japan ranks 167th among 193 countries in the world in this respect. It can be deduced from this mere fact that Japan has a long way to go to normalize state feminism. The extent of women’s participation in politics is too small to matter. The reprehensibly low proportion of national representation implies that the voice of women, who often occupy disadvantageous positions in society, is not reflected in legislation. The ongoing discussion about the institution of a system that would allow couples to retain separate surnames is one example of such concerns.

Article 750 of the Japanese Civil Code mandates that a married couple must share the same surname. Japan is the only country to establish such a law. It is common practice for a woman to take her husband’s family name. Thus, when a woman is married and changes her surname, she must amend her name in all registered documentation, including bank accounts. The paperwork required for such procedures is troublesome and requires the expense of enormous time and energy. This process also costs a woman the part of her identity that is attached to her maiden name. Thus, upon marriage, a woman must bear the entire burden of change. 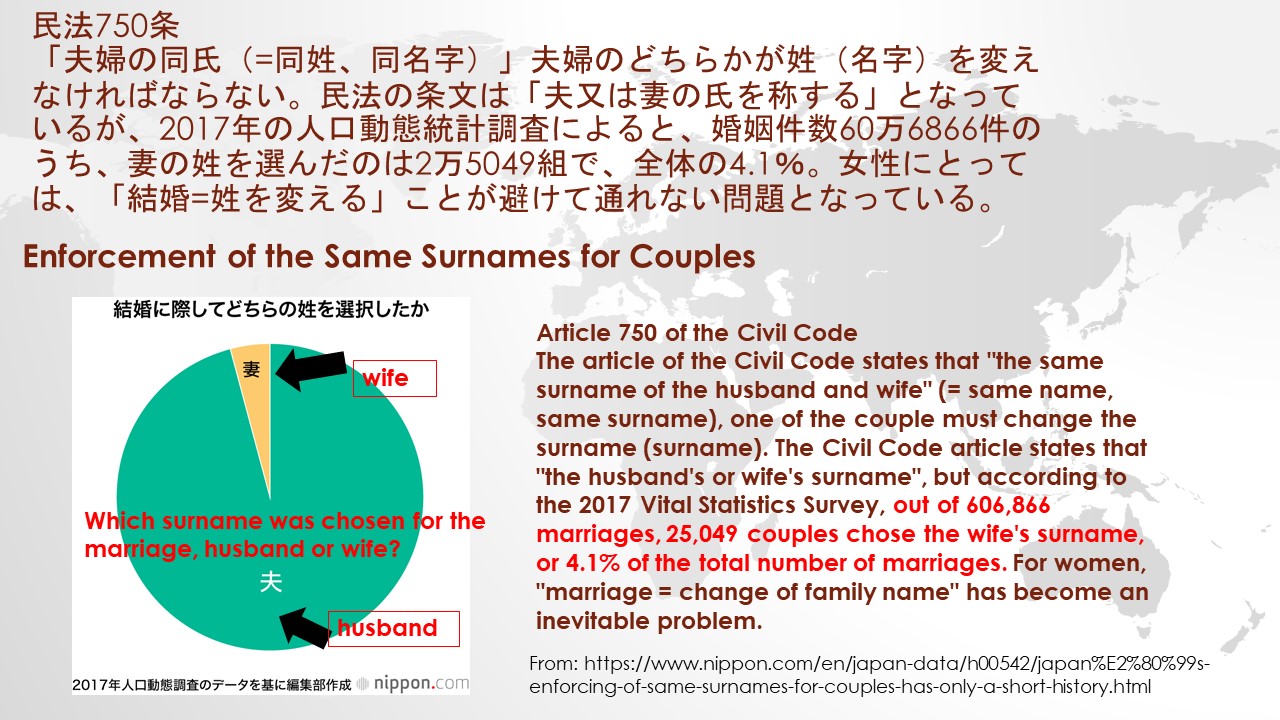 Reference: “Japan’s Enforcing of Same Surnames for Couples Has Only a Short History,” nippon.com, Sep. 24, 2019

The Japanese government has tried for some time to encourage the social advancement of women and increase the female presence in the labor market; however, society has not seriously followed suit. For women who are experienced professionals, a change in name could often imply a loss of workplace recognition. The remnants of patriarchy thus maintain persistent control over the lives of women. Such circumstances can be mitigated through the introduction of the system of allowing married couples to retain separate surnames. However, a reason why this law has not been rescinded is that the voices of women can be ignored within the halls of the male-dominated Japanese parliament.

Moreover, legislation is not the sole goal. For example, Japan has instituted a very generous paternity leave system. However, only a few fathers avail of paternity leave. Household chores and childcare are designated as women’s work, and dual-earner families are no exceptions. The widely accepted gender-based divisions of labor prevent fathers from taking paternity leave regardless of their right to take time out from work being guaranteed by law. Peer pressure and workplace harassment discourage men from exercising their right to share childcare chores with their wives.

At this juncture, I have a question for Professor Ringrose. New systems such as gender quotas must have been proposed when state feminism was encouraged in Norway in the latter half of the 20th century. I imagine there would have been a backlash from men and women who sought to sustain traditional gender norms. Can you outline the criticisms, if indeed there were any? In addition, how did the Norwegian state feminism overcome negative repercussions?

Recently in Japan, a conservative female member of the parliament triggered a major controversy when the cabinet office bureaucrats elucidated plans for the expansion of a one-stop support center for victims of sexual crimes and violence. She opposed the proposed scheme saying, “women can lie as much as they want.” Such a statement may be interpreted as laying blame on women who have been sexually victimized. Some female legislators do make statements that represent old-fashioned, male-dominated values in what seems to be an attempt to exercise their power by aligning their positions with men. Such expressions of opinion may fracture the solidarity of women. In fact, female representation could include women who espouse patriarchy.

I am interested to know if any incentive was offered to men and understand how the state motivated men to co-operate with the development of state systems that promoted gender equality.

Thus far, I have talked about issues relevant to the system and legislation. I now move on to the aspects of culture, education, and enlightenment.

My research interests are vested in cultural representation with a focus on theater and the performing arts. As a participant of the INTPART project, I am currently writing a paper on the Japanese reception of A Doll’s House, the famed play written in 1879 by the renowned Norwegian playwright Ibsen.

Ibsen advocated modernism in the world of theater from the end of the 19th century to the early part of the 20th century. His plays delved into the social issues of his time, rejecting the melodramatic depictions of the mainstream dramaturgy of the 19th century. Thus, Ibsen wrote plays that could be considered experimental. Nora, the heroine of A Doll’s House, realizes one day that her affluent life as the wife of a banker is actually fictional. It is well known that Nora’s characterization was revolutionary in the theater world of that time.

Ibsen’s creations include Peer Gynt, written in 1867, in which the protagonist is a very self-centered man who abandons his girlfriend and goes on a long journey, and Hedda Gabler, written in 1890, in which the heroine seems to embody the viewpoint that being a woman is like suffering from a dangerous disease. These plays indicate the patriarchal character of the gender norm in Norway 100 years ago, which is very different from the current standards.

I am interested in the way Japanese audiences of the early 20th century viewed the story of A Doll’s House. The reception of the play varied according to its spectators and according to their gender. The audiences of this play comprised artists, intellectuals, and the general public. The male artists and intellectuals were primarily interested in introducing modernism as a new art form. Conversely, female intellectuals who were members of the Japanese version of the Blue Stockings tended to focus on the women’s issues depicted in the play.

It has been 100 years since Ibsen’s plays were written. Contemporary Norwegian culture has changed dramatically in terms of the gender norm. This cultural transformation fascinates me, and I would like to know if a specific opportunity led to such a wide-ranging transformation.

Women’s universities in Japan are endeavoring to provide opportunities to enhance the participation of women in higher education and change the gender awareness of women. Such efforts are critical for the realization of a gender-equal society. Nonetheless, we have to think about converting the cognizance of the whole of Japanese society, including its men. I have spoken of the development of institutional systems and public education, and I believe both are essential for the occurrence of such transformative cultural shifts. I have other questions that I would like to ask. How has Norway achieved drastic changes in its gender culture? Was any incentive provided? I know my questions are difficult and sweeping, and I would appreciate it if Professor Ringrose could offer some examples.

Yoko TOTANI is Professor at the Graduate School of Humanities and Sciences and Director of the IGS at Ochanomizu University, where she teaches English and American literature and theatre. She holds an M.F.A. in theatre criticism and dramaturgy from Columbia University. While a graduate student at Columbia, she worked on Japanese traditional/contemporary theatre productions such as Kabuki, Bunraku, and Noh as well as Japanese avant-garde theatres performing in New York City. She also worked as an assistant to the avant-garde theatre director/playwright Lee Breuer and his company Mabou Mines. Her essays, which appear in academic journals and other publications, mainly center on theatre and performance, cultural politics, and playwrights such as Gertrude Stein, Tennessee Williams, Sam Shepard, and Maria Irene Fornes.